Models from London’s Underground have been rare in the past and have been limited to repaints of models already produced such as GWR Panniers and BR Class 20’s.

In the past the underground has built a set of stock for each line. If a model manufacturer is going to produce an underground train which one do they choose? The underground is undergoing a revolution at the moment, with the S-Stock from Bombardier being rolled out to many lines, one by one, in 7 or 8 car formations.

This is a better prospect for a manufacturer as a model covers more of the underground network so Bachmann have produced a model of the S-Stock train. But not quite. In recent years model shops started commissioning manufacturers to produce already released models in extra liveries. They then started to commission the manufacturers to produce new models, often with a period of exclusivity so they had a head start on the general trade. This was extended to museums such as the NRM doing the same. And so the S-Stock train was commissioned by the LT Museum. 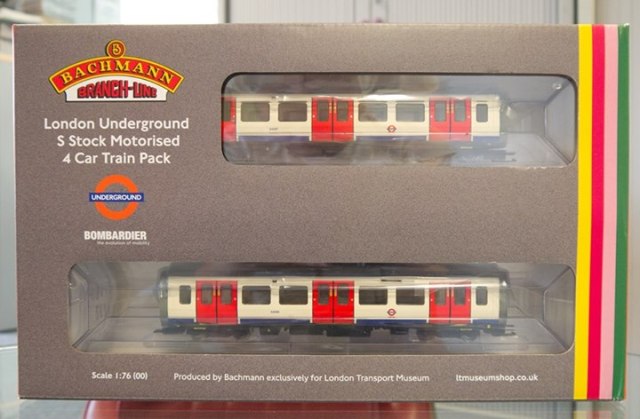 It was made available in a four car set with further intermediary coaches available to make up full 6 or 7 car sets. And for the first 100 to place an order in advance there was the chance of being invited to travel on a special underground excursion. So I ordered one. And I was lucky to get a ticket for the trip.

The actual trip was to take place on my birthday, Saturday 26th September, but when the day arrived I was too ill to go!

Since launch Train Tech have introduced a lighting and sound unit that uses some intelligence to provide an added dimension without the need of DCC. It provides interior lighting, and door opening/closing sounds. If the train is stationery for four minutes the lights turn off. They turn on as soon as the train moves. The door sounds occur when the train stops and starts, and for an added bonus there is a spark effect from underneath at random times.

There are a few underground model railways on the exhibition circuit such as Addison Park which won best in show at this year’s WycRail but they mainly concern themselves with above ground. I hope with the introduction of this useful stock we will see some layouts underground perhaps using clear tubes to represent the tunnels.

This entry was posted in Bachmmann, Underground, WycRail. Bookmark the permalink.